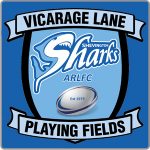 GETTING ACTIVE WITH THE SHARKS

With lottery funding from Awards for all, Shevington Sharks are leading the campaign ‘Lets get active with the Sharks’ to increase physical activity amongst young people within The local community.

The campaign will run till summer 2017 and for the last six weeks of the summer term a select group of the clubs coaches and open age players delivered classes and after school clubs, to Shevington Schools. The club has also just completed a highly successful summer camp at Shevington Community Primary School where over 40 local children enjoyed four days of fun filled activities (admittedly with a rugby bias!).

The Sharks also included a daily classroom session where children were educated about the benefits of having a healthy, balanced lifestyle. Activities included anything from making their own smoothies to calculating the children’s daily sugar intake.

Chairman Ian Robinson commented that this project was one of the many new initiatives that the Sharks were working on to increase participartion both in Rugby League and in sport more generally in the local community. 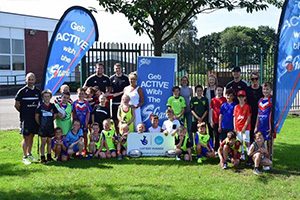